It’s Alcohol Awareness Month and alcohol is selling like hotcakes! With most people in a “lock-down” situation, we don’t know if the increase is a need to replenish supplies or a desire to numb the pain of layoff, uncertainty, sickness and death. Using alcohol as a “pain-reliever” is not a good idea in any circumstance, but during this pandemic excessive drinking can have major consequences for individual health and burdens on our systems.

There is evidence that drinking patterns change during difficult times. A study of drinking during the Great Recession found two conflicting trends. More people abstained from alcohol and those who remained in the drinking category drank at higher rates. The authors stated, “Most concerning was a large rise in the prevalence of frequent binge drinking of 7.2% relative to baseline levels… The rise in frequent binging was observed for both employed and unemployed respondents, suggesting that factors other than job loss were driving these changes.” Below is an illustration of the drop in any drinking and the increase in frequent binge drinking. 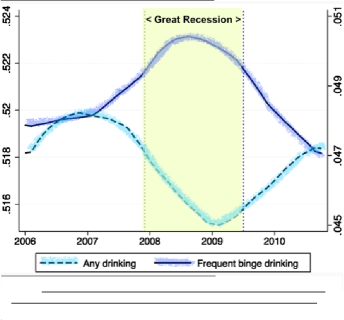 While drinking according to federal moderation guidelines should not be problematic, excessive drinking will make things worse. Here are some consequences:

During this time of a pandemic and the resultant national emergency, we need everyone to commit to alcohol moderation.

So, everyone: go to this website for a refresher on how much a person can drink and remain within the moderation guidelines. https://www.rethinkingdrinking.niaaa.nih.gov/

Be well and stay safe!

“As Economy Goes Down, Drinking Goes Up” https://www.webmd.com/mental-health/addiction/news/20111013/as-economy-goes-down-drinking-goes-up#2