In February, a federal report was released called, “Competition in the Markets for Beer, Wine and Spirits.” The report was done in response to President Joe Biden’s Executive Order 14036 which aimed to study competition across 72 segments of the US economy.

The report was conducted by the Treasury Department, the Federal Trade Commission, and the Justice Department. There were no public health agencies involved in the drafting of this report and this omission is obvious from the report. There were over 800 comments submitted including at least 200 from public health organizations. Yet discussion of the role of pricing, advertising, placement, promotion, proper alcohol products, etc. is entirely absent from this report. The authors seem to be focused on making alcohol cheaper and more widely available which the public health community has very strong research and opinions to the contrary.

The report starts its inquiry by noting two trends: The first is the substantial growth in the supplier tier. The number of beer suppliers went from 89 in the late 1970’s to over 6,400 today. Similar patterns are seen for wine and spirits. A second trend is “one of consolidation, particularly at the distribution and/or retail levels for beer, wine, and spirits and at the production level for beer. ” (p. 2 of the report) They note that the innovation in small and craft products is “unusual in a contemporary U.S. economy where many markets are dominated by a few, national brands.” 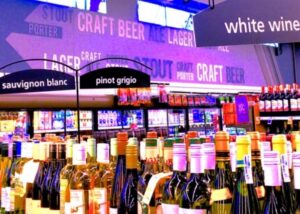 While they acknowledge that the majority of suppliers of all types are small, they don’t explain the implications of that. For example, the largest category of breweries has 4,705 suppliers (out of a total of 6,406) and they make less than 1,000 Barrels of product per year. That low production level normally will only supply a tap room and a few local licensees. Hiring a distributor or a large sales team for retailers is just not cost-effective.

Large alcohol companies have been on a buying spree to scoop up popular brews. Anheuser-Busch has bought over 10 craft beer companies. (See p. 31 of the report, footnote 114 for a listing.) While there’s been criticism of these acquisitions, they do provide a boost in local economic development. Take the case of 10 Barrell Brewing in Bend, Oregon. They were searching for a source of capital when ABI proposed a purchase and pledged a $10 million investment. In December, 2014, a purchase was announced. Employees were actually quite positive about the consolidation even a year later. Whether that positivity will continue remains to be seen.

The problem with beer companies buying craft operations is that often it involves buying pubs in different locations which puts them in the retail business despite three-tier prohibitions. 10 Barrell has pubs in Bend, Portland, Boise, Denver and added one in San Diego in 2017. (The San Diego location closed last December due to the impact of COVID.) Other acquisitions also included retail locations.

The inclusion of a detailed examination of pricing laws such as post and hold laws reveals another major flaw in the credibility of this study. The entire theme of this section of the report is that the laws providing for transparency and prevention of price wars for alcohol are bad. The public health voice is totally absent from this debate and instead this section reads as a deregulatory wish list. (A future newsletter will discuss pricing regulations in depth.)

There are a few positive aspects of the report. First, it is one of the few times where the federal authorities recognize the primary importance of state, not federal alcohol regulation: “The 21st Amendment, which ended Prohibition in 1933, incorporates special deference to state laws regarding intoxicating liquors. Consequently, state regulation has a different role in alcohol markets than in other markets. ” (p. 10 of the report). They also urge the TTB to resurrect rule-making on labeling to allow for greater information to the public of what they are drinking.

So be cautious about the report’s recommendations for states that suggest changes might be made to the three-tier system, franchise laws, and post and hold laws. They seem to favor direct-to-consumer shipment without acknowledging the widespread non-compliance currently experienced in that system. Thus, there is a lot of work to be done before it is advisable to make changes.

NOTE: More to come about this report in future newsletters, especially public health issues and those dealing with pricing measures.

“Competition in the Markets for Beer, Wine and Spirits,” Feb. 2022. Accessible at: https://home.treasury.gov/system/files/136/Competition-Report.pdf