In this newsletter, we will continue discussion of a federal report called “Competition in the Markets for Beer, Wine and Spirits,” which was completed in response to President Joe Biden’s Executive Order 14036. This Order was intended to study competition in various parts of the US economy including the alcohol market. While there were at least 200 comments submitted by public health organizations, the concerns they raised were largely ignored. Thus, this is part of the attempt to correct the record.

Let’s start at the beginning which should be “Why do we regulate alcohol?” The obvious answer is because of the great harm alcohol causes when abused. Not only does alcohol result in 95,000 deaths per year, but has serious economic costs due to work days lost. In addition, excessive alcohol consumption can result in chronic health effects like heart and liver disease; injuries, violence, and unintended pregnancies, some of which may result in fetal alcohol syndrome.

Just this month, a new study was released that indicated, “The number and rate of alcohol-related deaths increased approximately 25% between 2019 and 2020, the first year of the COVID-19 pandemic.”
JAMA. Published online March 18, 2022

But beyond the need to regulate alcohol as a product, our country has made the unique and prescient policy choice to regulate the industry that makes it by preventing vertical integration and certain harmful trade practices. These same kinds of alcohol harms and competition harms were present before Prohibition. They have generally been attributed to integrated business practices that focused on very aggressive and exclusive sales tactics to achieve high profits.

Those who cry for deregulation claim that the world has changed and pre-Prohibition is just ancient history. However, excessive alcohol use continues to cause great harm. Further, the desires of business to squeeze out their competitors also remains. So, the need to reduce that harm of alcohol via regulation of the industry is still with us. 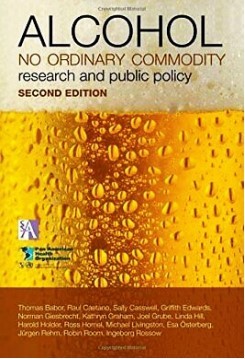 The science on what works to achieve those goals is well known, but not acknowledged in this report. A good example is the book, “Alcohol: No Ordinary Commodity, Research and public policy, Second Edition,” written by the world’s prominent alcohol researchers. It provides a table which describes the effectiveness and cost-effectiveness of a wide variety of regulations. The authors of the book also advise that the strong strategies are restrictions on affordability, availability, and accessibility, as well as drunk-driving deterrence measures. (See p. 242)

While the Treasury Report acknowledges that lower prices can increase alcohol consumption, the authors of the report cavalierly dismiss this concern by saying that higher prices can be achieved by increasing taxes. This glib comment fails to reflect the exceptional political difficulty of actually raising taxes and the fact that it doesn’t always work. For example, in the UK tax increases have not been passed on to the consumer. Therefore, Scotland instituted minimum unit pricing to prevent very cheap products from pushing consumption. (See quote and page reference below.)

“While research studies usually find that tax increases curb consumption by increasing prices, that has not happened uniformly in the UK. The reason is that the grocery market is so dominated by four large supermarket chains that they are able to absorb the increase or require their suppliers to do so. As a result, the tax is not necessarily passed on to consumers.”
The Dangers of Alcohol Deregulation, The United Kingdom Experience, 2016 Update, by Pamela S. Erickson, p. 6.

The Treasury Report fails to appreciate the public health and level playing field benefits of alcohol pricing regulation. Finally, while the exponential growth of small suppliers was noted by the authors, they failed to discuss the implications of this large number of suppliers most of which are very, very small. The supplier tier has gone from less than a few hundred nation-wide to more than 15,000. (See pp. 21-23 of the Treasury Report where they list 15,016 breweries, wineries, and distilleries by size.)

In 2020, the largest category of breweries were 4,705 small suppliers (out of a total of 6,406) that made less than 1,000 barrels of product per year. That low production level normally will only supply a tap room and a few local licensees. Hiring a distributor or a large sales team for retailers is just not cost-effective.

If a small supplier wants to expand to a regional or national market, they will need both a source of capital to expand and a distribution program to get the product to regional and/or inter-state markets. Wholesalers get a lot of blame for not taking on any supplier. But, no wholesaler for any commodity takes all comers. They usually require a track record of sales or some type of advertising ability so it can be a profitable investment. And, given the sheer number of small suppliers it would be impossible to take on everyone even if the number of wholesalers doubled or tripled. The authors of the report would lead you to believe that the majority of small suppliers are raising many complaints. But are they? Some may like the lifestyle they have as a small operator. As an example, consider this statement in a news article published by the Seattle Times:

“Everyone knows the failure rate for small businesses. Yet when you drive across Washington’s warmer side, tasting rooms now seem to outnumber fruit stands and taco trucks. How has Washington supported so many wineries in bad times? Small, it seems, is the secret. STAYING SMALL has several advantages. Winery proprietors can do much of the work themselves, holding down expenses. They can sell most of their wine directly to consumers, as the Perrys do, with relatively little spent on promotion and no big cut going to distributors and retailers.”
Brian J. Cantwell, “Small Washington wineries find their niche,” The Seattle Times, November 2012.

Clearly, we need to learn a lot more about our current supplier market as well as the impact on the wholesaler tiers.

Moreover, we need to understand that getting rid of regulations is not the way to improve public health. We need to understand that our public health priority demands that we strictly regulate alcohol and the alcohol business. And, we should also recognize that our regulations have actually worked to level the playing field so that large and small enterprises can be profitable without neglecting public health. Many current regulations are actually beneficial for business. Policy makers would be well advised to gain more knowledge before changing the rules.

Alcohol Use in the United States, National Institute on Alcohol Abuse and Alcoholism

“Competition in the Markets for Beer, Wine and Spirits,” Federal report, Feb. 2022.

Excessive Drinking is Draining the U.S. Economy, Centers for Disease Control and Prevention

“The Dangers of Alcohol Deregulation, The United Kingdom Experience, 2016 Update,” by Pamela S. Erickson, can be found on the Reports page, See p. 6