A recent survey by the Center for Alcohol Policy (the Center) revealed that a large percentage of the public strongly supports our state-based system, understands that alcohol is a unique product warranting regulation and wants policy-makers to prioritize public health and safety when considering dealing with alcohol regulations.  To drill down on this subject, I had a chance to interview the Center’s Executive Director, Kelly Roberson. 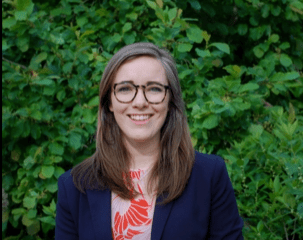 Kelly noted that the Center began running this survey almost a dozen years ago and does it every other year.  The reason for doing the survey was to know what people actually think about alcohol regulations.  It’s kind of a “temperature check” of the national sentiment.  Kelly said the responses are amazingly consistent over time, and in some cases, support has grown since the early years.  In addition, support is very much non-partisan as there were few differences between Democrats and Republicans.

While the media sometimes calls for change, characterizing alcohol regulations as “antiquated”, the public is quite satisfied with them.  Kelly noted that 87% think it is very important to regulate the alcohol industry.  Total satisfaction with the purchasing system has increased from 81% in 2017 to 85% in 2021.  And, 71% said their state regulations are “about right”.  In 2017, that percentage was 63%.   There seems to be no demand for more places to purchase alcohol as 76% are satisfied with the number of places they can purchase the product.  In 2017, that percentage was 68%.  The survey demonstrated support for the three-tier system.  A total of 83% said they support the right of states to require alcohol to be sold under this system and 80% thought it was working well.

When asked about what was new or surprising, Kelly described a new question about whether people thought regulatory changes made during the COVID pandemic should be made permanent.  Many states allowed licensed establishments to sell alcohol “to go” and allowed dining and drinking in outdoor spaces.  Not many thought these changes should simply be kept in place.  Fifty-six percent said you should evaluate their impact first, and 21% favored returning to the original laws.  Only 22% believed we should just keep these new things in place.  But, in allowing such things as alcohol “to-go”, those individuals and companies should be held to the same standards as regular licensees. 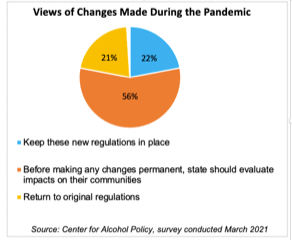 For those wanting more information about the survey, go to www.centerforalcoholpolicy.org.  A more detailed account of the survey can be downloaded below.

Interview with Kelly Roberson, May 6, 2021.
Despite Changing Behaviors During Pandemic, America’s Attitude Remains the Same: The Alcohol Regulatory System Works and Americans Like It, Center for Alcohol Policy