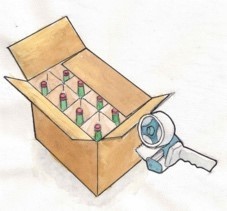 For years we’ve counted on the US Postal Service to mail our letters and ship our packages, but most of us don’t know much about what you can’t send.  It turns out there is a large list of such things!  In fact, there is an entire publication detailing what is absolutely banned versus restricted versus okay to mail. (“Publication 52–Hazardous, Restricted and Perishable Mail.”)  On the list of restricted products is alcohol.  With very few exceptions–like cough syrup—the US Postal Service is prohibited from shipping alcohol.  But a new bill in Congress could change that.  Proponents claim it would be a simple way to expand markets and raise revenue for a struggling postal service.

I realize that it sounds simple, but as a former alcohol regulator, I know the idea raises serious public safety concerns and lots of complications.  I immediately wondered how it could be accomplished, what are the safety risks and whether the revenue would be enough to cover the costs.  I think it’s important to raise these issues so that our elected officials can make the best decision.  For many of these issues, I have no answers and being a non-lawyer, I can’t attempt to answer legal questions.   But let’s look at some of the specific concerns:

“List of Allowable Objects You Can Send Through the US Postal Service,” By: Fraser Sherman, reviewed by: Jayne Thompson, LL.B., LL.M. Updated March 30, 2020

Countries that drink the most alcohol – ranked, The Facts Institute (based on data from the World Bank)

List of countries by alcohol consumption per capita, Wikipedia