The Three-Tier System: A Health Report

The state-based three-tier system is fundamental to our country’s alcohol regulatory framework, yet it is consistently under attack. You see articles in the media which advocate treating alcohol like any other commodity. As the former head alcohol buyer for Costco once said “…But at the end of the day, it’s just a beverage.” She noted that alcohol was nothing special and it was akin to commodities like toilet paper or tin foil! (In fact, many states have important pricing and marketing regulations that are unique to alcohol.) 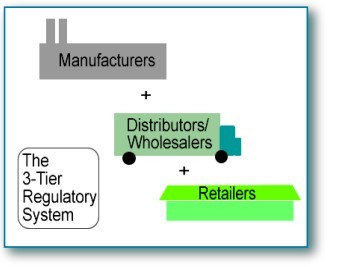 So why do we have a three-tier system and what does it do for us? The courts have some good explanations. In a 1971 case, (known as the California Beer Wholesalers Assn., Inc. v. Alcoholic Bev. Etc. Appeals Bd., 5 Cal.3d 402) the court noted that the purpose of the three-tier system was to prevent the marketplace problems of the Tied House which was prevalent before Prohibition. It is a very readable explanation about why most of our states adopted a three-tier system:

Today most states have a healthy three-tiered system where a licensed manufacturer is independent and can sell its products to a licensed wholesaler who, in turn, can only sell to a licensed retailer. No ownership or financial ties are permitted between tiers leaving each independent. In its two most recent cases, the United States Supreme Court has stated “The three-tier system is unquestionably legitimate.”

This system affords states major benefits besides the primary purpose which is to provide an orderly market devoid of the aggressive sales and public health problems of the pre-Prohibition days. It breaks down the economic players to smaller sized players. In most states, the wholesaler collects the excise tax. This is a major savings for states. Otherwise, states would have to bear the expense of developing a system for excise tax collection. In addition, we are blessed with non-counterfeit alcohol products since the closed distribution system prevents bootleggers and bad actors from getting illegally made products to the consumer. Other countries such as the United Kingdom don’t have such a system and periodically find fraudulent alcohol producers who often use methanol for their products causing severe illness and deaths.

As then Judge Ruth Bader Ginsburg noted in a case she handled, “Both its historic association with corruption and the general belief that cheap and plentiful alcohol is not an unmitigated social good (as opposed, say, to cheap and plentiful home heating oil or shoes) suggests that the alcohol industry requires special oversight and regulation.”
Fedway Associates, Inc., et al. v. United States Treasury, Bureau of Alcohol, Tobacco And Firearms, Respondent, 976 F.2d 1416 (D.C. Cir. 1992)

Over the years, states have made various exceptions to three-tier provisions such as wholesalers/suppliers giving things like napkins and coasters to various retailers. Such things are not considered major financial ties that obligate the retailer to the supplier. In addition, states have allowed a certain amount of direct shipment to consumers from licensees, both in and out of state. While this exception skirts the three-tier system, it is a small part of the overall market. Some states try to ensure that it will be a limited practice by capping the amount which may be sold directly to a customer per month or per year. A circuit court decision in North Carolina recently ruled that making a small exception for out of state wineries was within the state’s purview and did not constitute an abandonment of the three-tiered system as the plaintiff claimed. At this time, such exceptions are just that…relatively minor acts that do not obliterate the three-tier system. However, the actions bear watching. If the exceptions gain substantial ground, the three-tier system and its benefits could go away. This would create a low priced, volume based alcohol market where public health, small businesses and the general public end up losing.

“Costco’s head wine buyer causes a stir with her remarks,” by Paul Hodgins, The Orange County Register, May 9, 2012.