Why Alcohol is No Ordinary Commodity

Periodically we need to be reminded about alcohol and why it’s not just an ordinary commodity. There’s a lot of talk about expanding the availability of alcohol because it’s a “legal product.” And, grocery and convenience stores increasingly treat alcohol as just another product. There is a whole new array of alcohol products such as hard seltzers and canned cocktails. These products have been promoted heavily and touted as a good “summer drink.”

Here’s an example. I had just checked out at a local big box store when I almost ran into this display: 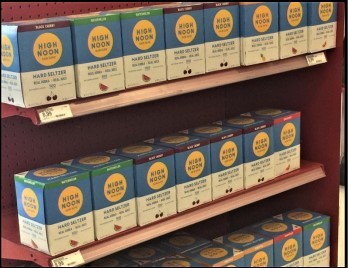 I was very surprised as I knew the store had a liquor license, but such products were always confined to the alcohol aisle in the grocery section. I saw that this was a “hard seltzer” which came in four flavors and was made with “real vodka”. The display was obviously designed to catch the eye of people who hadn’t been to the “alcohol section,” which often includes underage youth.

It turns out that there are an increasing number of these products made by soft drink companies in collaboration with an alcohol company. Coca Cola works with Molson Coors to make its Topo Chico brand hard seltzers. High Noon is actually made by E. & J. Gallo. A recent example of collaboration is Pepsi’s work with the Boston Beer Company to make “Hard Mountain Dew.” They are test-marketing it in six states: Arkansas, Florida, Iowa, Minnesota, Oklahoma, and Tennessee. Often, the product is merchandised with the original, non-alcoholic product…such as this “end cap.” 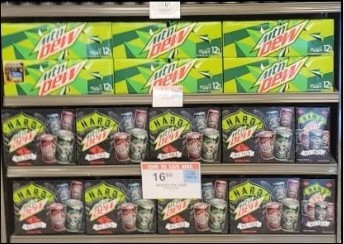 It is unclear whether these manufacturers are paying for these displays which they often do for sodas. It seems likely that retailers are not very familiar with “trade practice regulations” since they are primarily regulated at the state level. But there are both federal and state trade practice regulations designed to maintain independence of the three tiers of the alcohol industry. So, there could be some overlooked violations.

These products gained a warning by a Los Angeles TV station which noted that spiked seltzers and canned cocktails increased sales in the last two years. They warned, “If you’re going to keep such products in your home, make sure they’re inaccessible to kids – and those young ones know that this lemonade, and that lemonade, may be very different.”

So, let’s review why alcohol should not be sold like an ordinary commodity.

What you can do:

PERSONAL NOTE: This email newsletter is very late because on May 11, my husband and I had a fire in our personal residence. Despite the fact that the fire was confined to the garage and attic, the Fire Department put so much water on the house that two rooms were soaked and the ceilings collapsed. The City of Henderson declared the house uninhabitable and it will take 3-6 months to restore it. I have a home office which was not touched by fire or water, but there is smoke damage. We were immediately moved to a hotel and then to a short-term rental house. I finally got my office equipment installed, so I am now back in business…but it took a while! Many thanks go to the Henderson, Nevada Fire Department who responded very, very quickly and saved our house. Also, many thanks to our insurance adjuster who has been wonderful.